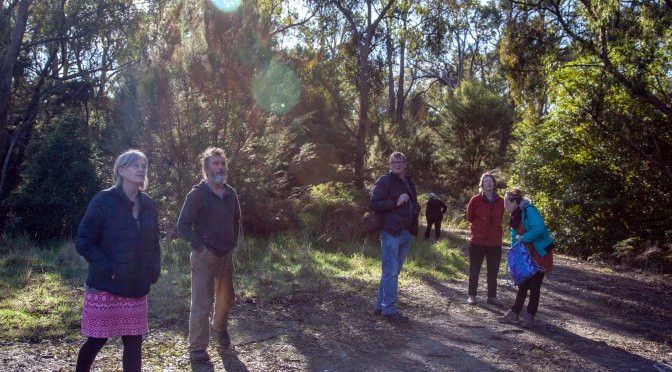 Terry and I have been walking and filming in the Coastal Woodlands over the last couple of weeks. We’ve also been spending time with singing and ukulele groups who have been learning the song ‘Are You Listening?’ for the outro of a film we are making about the precious Western Port Woodlands, currently at risk from sandmining expansion.

We have been inspired by the community’s willingness to come together and raise their voices in this way. This week, we have worked with two of Mandy Farr’s local ukulele groups, one at the Warrawee Senior Citizens Club in Inverloch and another at the Wonthaggi Neighbourhood Centre. There we were joined by members of the Bass Coast Post community and the Gippsland Singers Network. We have filmed the Vocal Nosh group at St John’s Uniting Church in Cowes, as well as some Coastal Connections participants singing outside the Wonthaggi Arts Centre. In the middle of the week, a group of us sang together and went for a walk in The Gurdies Nature Conservation Reserve, led by knowledgeable birder and conservationist Gil Smith. Last weekend, the Melbourne Climate Choir gathered in a park in Brunswick to sing for the film in support of the Western Port Woodlands campaign. The Climate Choir brings together members of different choirs from across Melbourne to support environmental actions.

Next week, the U3A Choir on Phillip Island will be learning and singing the ‘Are You Listening?’ song. We will also be filming members of the Melbourne-based ‘Music for a Warming World’ collective and a choir from the ‘Save Western Port’ community, who are offering their support from the other side of the Bay in Balnarring.

Nicki Johnson is a musician, an environmental activist and the Program Coordinator at Community Music Victoria. We have worked and sung together in environmental and intercultural arts projects in Bass Coast and beyond over a number of years. Nicki performed at the 2019 Island Whale Festival and has facilitated singing and ukulele workshops at Community Music Victoria’s Music Camps in Grantville. Terry has made a short film about Nicki’s work as a singing leader which reveals her commitment to climate justice and her approach to interweaving music and environmental action:

Nicki believes that community music can play an important role in raising awareness about environmental issues. In her words …

‘Music has a way of bringing us together.  If we venture into the areas of despair and grief, we won’t be able to get any work done. If we don’t feel hope, we can’t go forward effectively. I love to facilitate conversations and sing songs about the planet and the responsibility we have for making sure it is as healthy as possible.

Singing and playing music opens us up. When we sing with people, our breathing and our heartbeats synchronise and we become one organism vibrating together. This opens our hearts and our senses and we are able to connect. I think the ability to feel connected to other people and to experience empathy is the thing that will really enable us to make a difference.

I love that when we sing together, we start to resonate together and our hearts open. Singing is 90% listening. Ideas of blending and harmony are not just aural concepts. A choir is a living organism that can teach people how to be in harmony. Harmony is a lived experience. Giving people the opportunity to be heard is a powerful way to move forward together.’

Dr Peter Dann is another community leader who raises environmental awareness and inspires action. Peter is the Research Director of the Phillip Island Nature Parks. He has been working for over forty years in wildlife conservation, with a particular interest in seabirds and shorebirds, the ecology of islands and the conservation of threatened species. Peter was a guest speaker at a General Meeting of the Phillip Island Conservation Society held earlier this year. The topic of his presentation was ‘Ten Remarkable Things about the Natural History of Phillip Island: A Personal List.’ It was a compelling presentation, informative and from my perspective, very moving. Peter’s commitment to conservation was clear, as was the sense of care that has underpinned his decades of scientific work in the field.

One of the ‘remarkable things’ he spoke about was the successful introduction of a population of Eastern Barred Bandicoots to Phillip Island (Millowl), now extinct in the wild on the mainland. After a successful trial release on Churchill Island, they were introduced to the Summerland Estate on Millowl. Their numbers are growing and the bandicoots are now doing so well, they have also been released onto French Island.

A sense of possibility and agency was also central to Peter’s story of the buy-back of the Summerland Estate on Millowl, which has enabled the on-going restoration of the Little Penguins’ habitat on the Peninsula. Peter’s stories are engaging and inspiring. I wrote two children’s songs in response to his stories, one about Eastern Barred Bandicoots and one about Little Penguins. Over the coming months, I will be teaching the songs to local children and telling the stories about the conservation work that inspired them. The world our children and grandchildren are inheriting needs stories like these. Here are the links to the songs:

There are many reasons to feel discouraged at times in the conservation field. So much has been lost and continues to be threatened. It’s easy to slip into a sense of despair and powerlessness. The conservation work that Peter as a scientist and Nicki as a musician undertake is vital in the deepest sense of that word.

On Saturday 17th July, COVID-willing, you can also be part of this life-affirming work that calls for the protection and preservation of the natural world. The Bass Coast Artists Society is hosting an event, ‘Halcyon Harmonies and Reflections Exhibition’ at the Goods Shed in Wonthaggi. There will be photographs on display and local musicians will be performing all day. At 2.00pm, we’ll be facilitating a Pop-Up Conservation Choir to learn and sing the song ‘Are You Listening?’ for the Coastal Woodlands film. You are warmly welcome to join us. The lyrics and recording of the song can be found here.

And if singing publicly is not your thing, there are other ways you can be involved. You can learn to sign-dance the song (a slow form of deaf-signing) or you can be there to simply witness the strength and resolve of our community in action.

To learn more about the Save Western Port Woodlands campaign and become involved in a range of ways, go to http://www.savewesternportwoodlands.org/