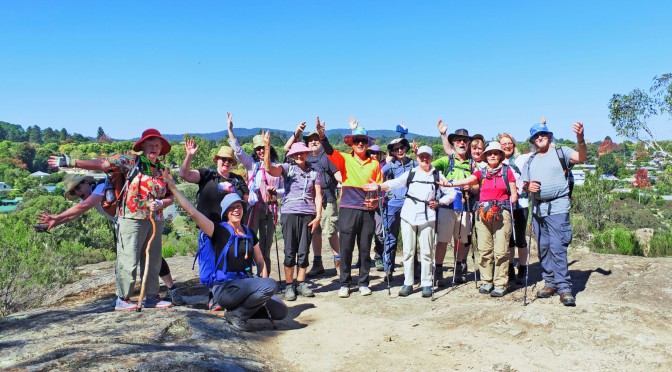 Over the past ten years, Leanne Murphy, a community musician from North East Victoria, has experimented with ‘a lot of things’ to keep herself and other people energised; running long-term projects, singing groups and ukulele groups.

Since the pandemic began, Leanne has been finding it ‘hard to know what’s what’, with the restrictions around group music-making changing so often in recent months. Not one to let this get her down, Leanne has returned once again to experimenting and having fun in finding new ways of getting back to community singing.

“I’d optimistically do ‘pay in advance for four sessions and invariably, one of them would have to be cancelled and it’s a nightmare having to do refunds and stuff so I’ve just decided I’m going to keep things casual, see how it goes and keep it all nice and fresh!”

Back at the end of March, the first project off the blocks was a Beechworth Easter Sunday Walk and Sing which was run, (well, walked!) by Leanne through Albury Wodonga Bushwalking Club as a freebie for club members.

“Combining bushwalking with singing, I wasn’t certain if anyone would be interested but 16 set off from the Beechworth Powder Magazine at 9am, after entertaining a number of tourists in the carpark with a rendition of Bele Mama (from Cameroon), and one more joined us halfway along the track.”

The group’s first stop was One Tree Hill where they sang Hamba Nathi, with the English translating as “Come with me for the journey is long” in 3-part harmony.  Then it was on to The Precipice and morning tea, accompanied by Swing Low Sweet Chariot to celebrate the spirit of Easter Sunday. Various other stops along the way included Fiddes Quarry where the group had an audience of one for the haunting round, Be Still And Know by Jokhim Meikle.

“A delightfully curious lady from Palestine stopped to listen and insisted she definitely did not want to join in.  We did manage to coax her into taking a video though.   By the time the group returned to the Powder Magazine, discussions were already underway about the potentials for a ‘next time’. I realised I’d never done a singing walk before and nobody else on the walk had ever done that before either. It was quite eye opening for me.”

Leanne has been walking with the Border Bushwalkers for around three years now. “They’ve really developed my confidence in how far I can walk and also what kind of challenges I can achieve, so I’ve gone from being somebody who’s never camped or hiked overnight to doing the Great Ocean Walk which is nine days of carrying everything on my back by myself! For me to be able to give something back to the club that I’m qualified to do and lead a walk with people who are very good at bushwalking but may not be as strong with singing, it was a real joy!”

Singing outdoors felt particularly good as Leanne has noticed people feel nervous about singing inside, in spite of the North East having had no recorded cases of COVID.

“There’s an underlying sense of wondering whether we’re allowed, or are we going to get a visit from the authorities looking over our shoulders saying ‘you can’t do singing’ and so I thought let’s just get something going and see who’s still interested in having a sing, and I think that people were just really grateful to have the opportunity to sing together again.”

From May 2, Leanne is running a series of informal, drop-in Sunday singing sessions to help see out the winter months. This project is called ‘Hearth Songs’ a name inspired by the album Hearth by Michael Kennedy. “I really want to do one of the songs off that beautiful album. It’s called ‘Indigo’ and is all about looking after this indigo planet we live on. Because I live in the shire of Indigo I thought it would be a good match up, too!”

Leanne is interested to see how Hearth Songs will go in a venue with casual numbers. “I’m just putting out an intention to the universe, as you do, to say ‘please let the numbers be perfect for this venue! So we’ll see how that goes.”

Prior to COVID, Leanne developed and delivered a program called Spring Sing which was run two consecutive years during October and November, and was enjoying thinking up other, short-term programs. “I used to run a longer-term singing group but couldn’t sustain once a week sessions throughout the whole year, and so I’ve been focussing on programs I know I can manage.”

Following the success of the Easter Sunday Walk and Sing, Leanne’s hoping to continue with the bushwalking and singing theme to celebrate the springing of Spring, sometime in November. Her vision is to combine a weekly mid-week walk with more, joyous outdoor singing and hopes this will build up the health and stamina of everyone involved:

“We might possibly work up to a weekend hike where people can camp overnight and sing, doesn’t that sound good?”

Until then, drop in and join Leanne for some heart-warming community singing sessions to banish the cold and keep the glow going as we head towards winter. Hearth Songs will be stoking up each Sunday afternoon throughout May and June with chants, rounds and songs to warm your cockles through the cooler seasons.

Written by Deb Carveth, Online Editor for CMVic, in conversation with Leanne Murphy