A truly unique radio show championing the work of Choirs and Community Singing Groups is filling the airwaves above Upwey and beyond with the sweet sound of a cappella and accompanied singing each week.  The Aka-Pelican show is hosted by Rick Steen, a passionate choir singer and blues guitarist who’s excited to bring this opportunity to the world in what he believes is a first.

Rick’s Aka-Pelican show is broadcast by 3MDR, (Mountain District Radio) on 97.1fm. The community-run station was set up in response to the Ash Wednesday bushfires in 1983 to provide effective and direct communication to locals in the event of emergency, and other than a station manager, it is staffed and run entirely by volunteers.

With a background in folk and blues music, Rick joined the station as a volunteer sound engineer before being trained as an announcer and invited to present a show of his own:

“I thought what would work really well is a show dedicated to supporting choirs and a cappella singing. There are around seven choirs in the Dandenongs between Upwey and Gembrook alone, making it a good niche, good for the station and its membership; people will be all over it!”

3MDR has enjoyed a variety of homes during its 25-year history including a bus, a water tower and a shop. In February, the station relocated to new premises at the Forest Park Homestead, where Rick now has the luxury of a large studio space suitable for live to air broadcasts during his program’s two-hour time slot, from 3 ‘til 5:00pm on Wednesdays.

Having run Aka-Pelican for just over 6 months now, Rick reckons it takes half an hour to settle into the hot seat. “I don’t have a production assistant, I’m handling everything and you have to be highly tuned right from the word go.”

By then he’s in the groove and ready to showcase live or recorded performances from choirs and singing groups from the local area, Melbourne and the surrounds. There’s been one change to the Aka-Pelican format since its inception, the decision taken by Rick to incorporate the material of accompanied choirs into the show. “Too many wonderful choirs felt that they didn’t qualify to participate as their songs were accompanied, so I implemented one ‘Golden Rule’, which is that vocals of the choir must be the dominant feature of the music.”

Broadcasting beyond the hills, the radio’s reach is limitless as people can listen to 3MDR online, and Rick is excited that this provides the opportunity for home grown, grass roots music-making to reach a universal radio audience.

“There’s good reception out in Gippsland and down to Philip Island though most people listen online. It’s a worldwide thing,” says Rick, who is happy to advocate for the joy and benefits of community singing and is also keen to interview community choir leaders as part of the program each week, either in person or over the phone.

If you’ve recorded material with your singing group or choir that you would like to hear on air, Rick’s your man. His vision to provide a voice to singing group and choirs combined with Aka-Pelican’s performance space, two-hour program slot and the option of going live to air will send the sounds of community singing soaring far and wide. Solo songbirds are welcome to contribute songs too, so long as they are unaccompanied.

To contact Rick and share material for Aka-Pelican or for further information, email 3MDR: radio@3mdr.com and mark your message for the attention of the Aka-Pelican Show.** 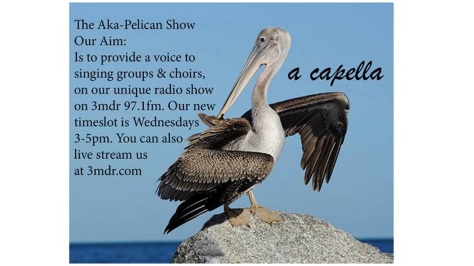 ** At the time of publishing this article, Rick is looking to recruit an assistant to help with the admin side of the show who would also be interested in becoming a co-host… full training will be provided!