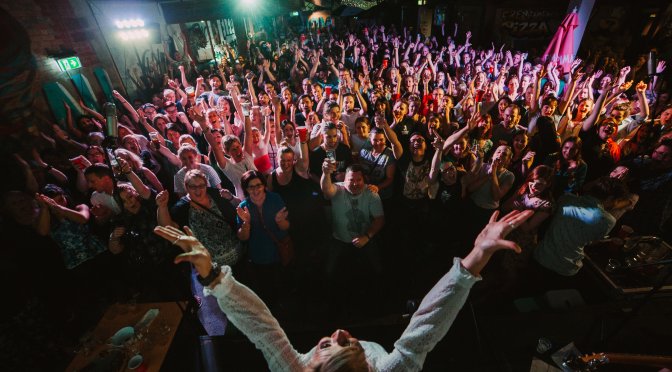 In just one year, Pub Choir has revolutionised the community music scene in Brisbane and beyond, bursting forth in a blast of fresh energy and zest and attracting hundreds of singers to its informal fortnightly singing sessions. The success of Pub Choir can be attributed to a combination of zeitgeist mixed with a twist of right time right place all shaken up with a direct, no frills attitude to music making. That and the fact it’s in a pub…

The ingeniously simple idea for Pub Choir was dreamt up in a conversation between co-founders Astrid Jorgensen and Megan Bartholomew. The women who met at uni, share the belief that everyone can sing and that music belongs to everybody. In talking, they realised that whilst music was their livelihood, they were no longer singing for fun and so, in March last year, Meg called a pub.

Astrid and Meg then recruited guitarist Waveney Yasso, whose job is to keep everyone singing in time and in tune. The Pub Choir dream team came into being and with support from a photographer and videographers to capture the magic, they were set to prove to the world it could sing.

“The hope was that if we put it in a friendly setting then people would come and remember that music is fun with friends. We should all be making music an everyday experience, and if we’re doing it more often and in casual ways then it becomes less ‘scary’.”

Astrid and the team put a single post on Facebook before the first session stating, ‘No Commitment, No Auditions, No Sheet Music, NO WORRIES!’ They smashed their hopes for 30 people that first night when 70 rocked up, and every event from then on has sold out. As Astrid says, “It’s been pretty crazy!”

The Bearded Lady in Brisbane trusted the vision, provided a space and supported the idea of Pub Choir at a time when it wasn’t a ‘thing’. The event soon outgrew the capacity of the room there, but its walls play a significant part in the success and history of the choir’s first year, something Astrid is very thankful for.

So does alcohol play a significant role in the success and phenomenon of Pub Choir? Even though it’s available, Astrid attributes the sense of anonymity that goes with being in a pub along with lots of other people, as the reason new singers feel disinhibited enough to relax and have a go. And once they start singing, the release of endorphins and the sense of connection can work their magic and do the rest.

There is no place for judgement at Pub Choir, it’s all about enjoying yourself and singing to have a good time.  Astrid chooses well known songs, something she finds makes life easier for everyone:

“For each upcoming session I try to pick something in a different style to the last so as not to be too repetitive; something very well known so that the melody doesn’t have to be taught too much, and; songs that are achievable in 90 minutes. I also am constrained by whether or not I can obtain the relevant licenses. Occasionally publishers will say no, so I try to have a few options up my sleeve.”

To teach the song, Astrid, who is qualified in choral conducting and voice, divides the group into three sections, taking them through line by line and within 90 minutes everyone is revelling in the buzz of singing in three part harmony.

There has been such an amazing outpouring of support for Pub Choir from the online community, that Astrid and the team are now in the process of booking dates for a tour. The idea is to travel around the country later in the year and share the experience of Pub Choir more widely in its original format. Astrid likes to combine elements of comedy into all aspects of her work including Pub Choir in the belief that if people are having a laugh they will relax and sing better, and she’s keen to share this out on the road too.

“Everyone is saying the same thing: We could really use this in our community, this looks so much fun.”

Pub Choir has received hundreds of emails from people across the country who are keen to use the same model, and asking if they can start up their own Pub Choir. This includes requests for Pub Choir’s budgeting, licensing, event planning, and even web content creation – some of which Astrid admits makes her feel a little uncomfortable.

Whilst the level of interest from other singing leaders keen to borrow and learn from the model of Pub Choir is flattering, Astrid feels this has to be done in conjunction with a good dose of self-assessment and points out that the Pub Choir model might not translate and work as well for everyone. She explains:

“I like being at the pub and I like joking around and I’m definitely more into casual community music making than something more ‘high brow’, but I think people may try to copy and paste something that might not necessarily fit their skill set as an educator, or even their personality. I mean, consider 500 drunk people who you don’t know,” laughs Astrid, “it won’t suit everyone, so play to your strengths and find what you are passionate about!”

An unexpected challenge faced by Pub Choir is the number of costs involved in running such a simple idea. Each singer pays $10 cash on the door and pretty much every cent of that goes back into licensing to pay for arranging and then filming the song. “Sometimes it’s thousands of dollars.”

This was an area they didn’t anticipate but their popularity and strong online presence thrives as a result of the high quality film clips they post, and their recent clip of the Cranberries song ‘Zombie’ sung and posted as a tribute to Dolores O’Riordan was shared by the band and went viral, a real high point for Astrid and everyone involved.

Pub Choir will be celebrating its first birthday in March with a party to end all parties at the Triffid in Brisbane, a venue with capacity for over 700 singers. It’s a beautiful old aircraft hangar which is a brilliantly apt place to celebrate a singing group that has taken off so fast. Go, go Pub Choir: the sky’s the limit.

**Interest in Pub Choir has come from each of the capital cities and beyond and the team hope to have visited them all by the end of the year, returning in between times to sing with their Brisbane crowd. If there are any pub landlords or venue managers reading this in Victoria who are open to the idea of hosting Pub Choir, hop onto their website and express your interest now!