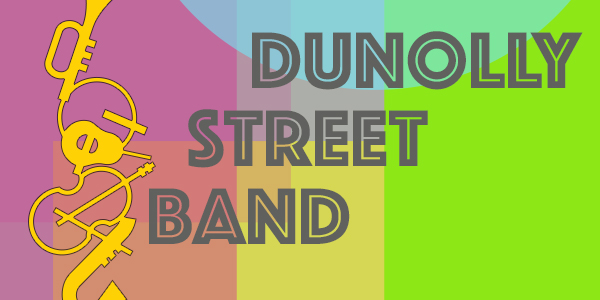 Picture the scene: a large group of leather clad bikers on a pit stop; add a healthy dose of community musicians into the mix, and what do you get? Broadway, a street through the small, regional town of Dunolly, last Saturday afternoon.

The latest addition to the CMVic StreetSounds project shook its collective feathers and stepped blinking into the light at 2pm last Saturday as the new and perfectly formed Dunolly Street Band. Emerging from the Ministry of Fun after less than two hours playing together, the fledgling band wasted no time in taking their newly learnt tunes into the street, where the bikers proved an enthusiastic audience for the horns, ukes, flute and accordion players.

Anna and Phil Ashton who organised the afternoon in collaboration with StreetSounds project manager, Lyndal Chambers, declared it it loads of fun and a total success.

“It was nicely low key and I don’t think anybody was scared!”

Anna was inspired to start a Street band in Dunolly after hearing about the opportunities offered by other bands emerging from the project, particularly the Kyneton Street Band, led by Andy Rigby, but still more than an hour’s drive from Dunolly. For Anna and Phil,

“..it didn’t make sense to be part of a street band anywhere else.”

The last community brass band in the town finished up about fifteen years ago. A ukulele group formed a couple of months ago, but for players of more honky and stronger sounding instruments, an opportunity to gather regularly has been a long time coming. Once she knew support from Lyndal Chambers and Community Music Victoria’s StreetSounds* project would support her vision of a Street Band for Dunolly, Anna felt the idea was too good to pass up and set the wheels in motion, posting publicity within the community and on Facebook. A street band is a fantastic way to bring together local people from all age groups and backgrounds, playing different types of instruments in different ways; a wonderful smorgasbord of sounds and skills.

As the promotional poster for Dunolly Street Band promised, ‘absolutely no experience needed, just come and play for fun.’

Anna admits she felt a bit nervous about numbers ahead of the gathering on Saturday. Strat (Brian Strating) and Lyndal were travelling up from Gippsland to help facilitate and Anna wanted them to have a good ole group to lead when they arrived. She needn’t have worried. Keen community musos travelled from the other side of Newstead and Bendigo to join local Dunollians, including a musician fairly new to the area which is what it’s all about, after all.  Anna knows other people are out there and keen for the band to happen, who simply couldn’t make it along last Saturday.

Following this hugely successful inaugural get together, there are plans to carry the band forwards into a bright (and brassy) future, and working together with Phil’s uke group. Anna is also hoping to encourage local school kids and their families to try it, too.

By the time the StreetSounds festival rolls around next May, it sounds like there will be a thriving Dunolly contingent out in the throng on the streets of Geelong.

And what happened to the bikers? They gave the new Dunolly Street Band an encouraging round of applause before heading off through the Central Goldfields, chasing the dissipating, freed-up notes of newly learnt tunes as they dispersed into the atmosphere.

Join the Dunolly Street Band! The band is in the process of arranging its next rehearsal. To be a part of it, contact Anna and Phil: 0490 077 902

*StreetSounds is a major project that resulted from the Victoria Makes Music Program and started in January 2015 with the help of funding from the Helen Macpherson Smith Trust and the R E Ross Trust.  The project aims to create at least 10 new street bands in Victoria and will run until Dec 2017 – find out more about StreetSounds here.