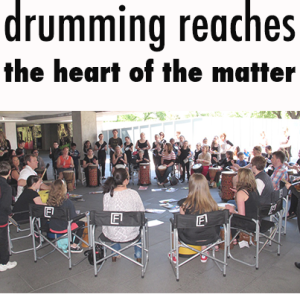 I run Playworks Oz. We run a variety of interactive workshops, including Drum Circles and In-The-Moment-Music-Making sessions. We use them as a vehicle for community and corporate messages and to teach concepts of Positive Psychology through playing in this medium. I was working for Toastmasters at a large conference some time ago. I had a hundred or so participants, all Toastmasters, a wonderful group of men and women who coach and encourage each other in communication and specifically, public speaking.

My session was entitled ‘Tuning Your Instrument’ and used a story and metaphors to invite the participants to examine and recall their strengths as public speakers. As the story and the players’ drumming skills progress, they are asked to note the areas they realise they need to work on. Power point is used to help tell the story as we play, but the pictures are simple, and easily described. They’re more metaphors and illustrations of the point I’m making. During this time the players are improving – in part due to their concentration on their listening and reading the ‘audience’, making subtle adjustments etc. I’ve run this and very similar sessions, successfully. Afterwards, I am fortunate enough to receive feedback. Sometimes its a simple thank you, other times it’s more in depth.

On this occasion, a small queue had assembled and I noticed one lady in particular. She was dressed in dark clothes that seemed to match her mood. She gave an impression of aloofness and I had seen her turn away from a younger lady who had attempted to engage with her. She had also seemed quite cranky when folk were finding their seats and had tripped, a little off balance. Now she stumbled again – only a little but it caused someone to bump into her.
I was concerned that she would be upset and yet she seemed to have had a great time. In that moment, I saw other people moving away from her- she had exuded that kind of aggression earlier, I saw the opportunity to calm things, I was still ‘mic’d up’. I stepped past the people at the front and put out an arm, she stood stock still puffing and panting and I simply said ‘I’m here to help If I may?’ and placed my arm under her hand, to steady her. ‘Young man’, she said not looking at me, but through me. ‘You already have.’ Tears rolled slowly down her cheeks under her glasses and though she held a tissue in her hand, she didn’t use it. ‘I got it. Damn it I felt it.’ I started to speak, ‘Young man don’t interrupt please.’ She took her glasses off, ‘I’m blind. but I felt more connection in that last 40 minutes than I’ve felt in the last 3 years. Thank you.’

My eyes welled up, people moved out of the way. There was another woman who had come into the room who now helped guide her. Later she would come and thank me ‘for whatever you did.’ The truth is, I didn’t. She did.

In this kind of music making, people show up with all sorts of ‘Stuff’, the connectivity you can create and feel by being a small part of something bigger and the feeling you get when your contribution is heard to make a difference is phenomenal.

Being able to see it is wonderful but being able to truly feel rhythms and music, a groups’ efforts and energy, the heart beat of the group rub alongside your own heart beat, It’s very difficult to want to remain detached from that and that is the magic.
for information about drumming workshops or groups near you, go to www.cmvic.org.au

One thought on “Drumming reaches the heart of the matter”